The galactic gang isn’t the only Colorado group over the moon about cryptocurrency and the potential of NFTs.

Danny Newman — Denver bar owner and tech guru — was one of the first to convert to NFT and is preaching about it to others. “Blockchain is a public ledger. It is therefore a register accessible to the public. Just think of, you know, an Excel spreadsheet that anyone can see at any time. And as you add rows to that, everyone can see what’s going on,” Newman explained during a March 22 NFT introductory event at the Ramble Hotel.

Part of the invisible city series of meetings, Newman’s conference attracted nearly 100 participants, many of them young professionals and artists. But there were also dozens of seniors interested in learning about new technology.

“Each new line you add – we’ll call it a block – is mathematically compared to the ones before it by everyone in the global network. And so everyone’s programming – the math – has to line up and be the same for that block to be officially added to the chain,” Newman continued. “So you literally have blocks that are all chained together. And that’s what gives everyone confidence that something in the block, you know, 444, happened, and everyone agrees on that.

Danny Newman was an early convert to NFTs.

When Bitcoin first came online in 2009, it had little to no value. In 2011, it was worth $1. But since then, the currency has skyrocketed, peaking in April 2021 at $64,800, dropping to $30,000 a month later, and then hitting $66,974.77 in October. Right now, the Bitcoin price is around $42,000. Some people have become incredibly rich by investing in cryptocurrency; others have lost fortunes. Betting on currency price volatility is only part of the appeal.

People all over the world are now considering a new approach to money, an approach that can remove banks, remove governments, and create a more self-sustaining monetary system. Such a vision is behind Ethereum, co-founded by a group of tech wizards, including Russian-Canadian tech whiz Vitalkin Buterin, in 2015. Ethereum is another open-source blockchain that’s akin to Bitcoin, except it has even more potential. “What Ethereum did that was very unique was that instead of just posting transactions — so posting some kind of cash flows of money — Ethereum added the concept of smart contracts,” Newman said.

Essentially, a smart contract says, “If someone pays that amount of money, they get that.”

Smart contract capability combined with blockchain technology to power the advancement of NFTs, non-fungible tokens. “A non-fungible token is something that cannot be replicated. It’s one of one. You know, the Mona Lisa is a non-fungible painting; it cannot be copied,” Newman continued. “The example that a lot of people use for fungible tokens is the US dollar. We all have lots of dollars. I can exchange my $1 for your $1.

An NFT is basically the receipt for an item that proves its authenticity. The most common item is a digital image or video, but NFTs can also be used for augmented reality, songs, and even more rudimentary things like land deeds and wills.

In 2017, a studio dropped the CryptoPunks NFT Collection, the first 10,000 item NFT wallet. That same year brought the CryptoKitties collection in the world. But NFTs really started gangbusting in 2021, with the sale of the Bored Ape Yacht Clubwhich had celebrities buying NFTs from the collection for astronomical sums. justin bieber bought one for $1.29 million. Bored Ape owners have access to private virtual clubs and exclusive events, and can also print T-shirts and craft merchandise using their specific Bored Ape.

Although Colorado doesn’t have a Bored Ape Yacht Club, it does have amazing NFT art.

In 2019, longtime Colorado art director Annie Phillips founded IRL art, a digital arts collective. IRL Art has six full-time members and is also behind the IRL Underground NFT gallery at 2601 Walnut Street. She says crypto technology has totally “empowered” artists, who now have more ability to gain recognition and earn money from their craft. Digital art NFTs, for example, initially sell for a certain value, but then usually reward the artist with a certain percentage on each resale.

“In this case, the [NFT is an] art-related receipt that can be tracked online, and this receipt can also provide you with certain benefits and conveniences, which every NFT community must provide – this is called a utility. And the utility behind each project is pretty much what drives price action,” says Kyle Morton, one of Colorado’s three co-founders. galactic gang. 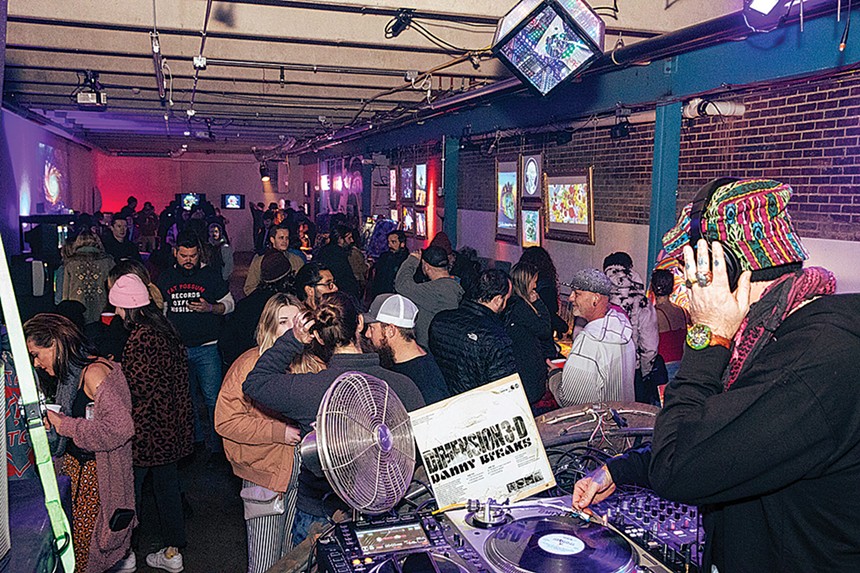 Courtesy of the Galaktic Gang

The NFT art was a big draw to Ethereum Denver, a hugely popular conference that brought together 10,000 attendees including Buterin, Kimbal Musk and Andrew Yang in Denver in February. “This idea of ​​having a rare digital property that you can create, sell, and interact with is now a thing,” notes Ethereum Denver founder Kent Barton.

Same Governor Jared Polis addressed the ETHDenver crowd. “It’s definitely the most fun thing I’ve had to do this month,” he said. He then posted a photo in which he was posing alongside Buterin.

As Polis strives to make Colorado’s economy blockchain-enabled, the state is already becoming a hub for NFT artists like Matt Treece, 34, aka Eceertrey, a self-taught artist who worked in the cannabis industry. “People here in Denver have apparently been there for years. I think because of the Ethereum Denver conference, people here have been connected to the deeper development things that are happening on the blockchain,” says Treece. “To me, that’s cool, because the art world seems so out of reach in the sense that mainstream galleries didn’t even understand what I was doing.”

Treece’s NFTs often include three-dimensional objects sculpted from landscape photos of the western United States. He even made some of these sculptures using virtual reality technology. Denver has “one of the strongest NFT scenes I’ve seen in real life in any city,” says Treece, comparing it favorably to the arts hub of New York and the crypto hub of Miami.

Another talented Colorado NFT artist is Ally Grimm, 30, aka A.L. Grime. “The slogan of my art is ‘the spiritual journey to the connection between technology and humanity.’ I’m trying to rethink how a computer would feel if it tried to process human emotion,” she says. “I often depict the female figure. I think the feminine as a creative spirit is the embodiment of humanity.

Grimm has an NFT mural on display at the IRL Gallery. She sends physical paintings to buyers, along with an NFT to show “authenticity”. The two elements are linked by a bullet in the table. “I think in the coming months I just want to start making NFTs that only exist digitally, without the physical,” she says.

The NFT realm has opened up new options for artists. “I’ve basically made art all my life and sold it and tried to pursue my life’s goal of making art for a living. I’ve also had a career professional for the past 25 years, so it’s always been a side project, and now hopefully it’s the kind of thing I can transition into full-time,” says Jeff Jagunich, 42, aka JeffJag, a Denver-based abstract watercolor artist who works by day as a motion graphic artist. “I’ve sold more NFTs this year than I’ve sold art in my entire life.”

How the Ethereum Merger Promises Much Greener Crypto